Chronicles of the Second Global War 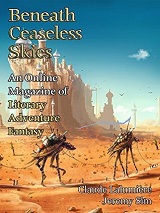 Chronicles of the Second Global War is a seven-episode alternate-history espionage serial. The time is now, but history evolved differently than in the world we know, and the geopolitical map is, while peppered with familiar cities, substantially altered. Each self-contained new episode features different characters, and each is set in a different location (or locations).